“A Political Creed” by Hans Wißkirchen

In today’s reading section, Hans Wißkirchen, President of the German Thomas Mann Society, thinks about how the depiction of the magician also mirrors Mann’s own political beliefs. 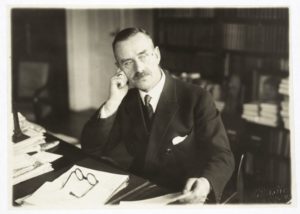 “A Political Creed” by Hand Wißkirchen.

“Shall we go away whenever life looks like turning in the slightest uncanny, or not quite normal, or even rather painful and mortifying? No, surely not. Rather stay and look matters in the face, brave them out; perhaps precisely in so doing lies a lesson for us to learn.”

In the story of the magician Cipolla, Thomas Mann develops with this triad of “stay,” “look,” and “brave out,” the formula which makes the repulse of National Socialism solely possible. Simply to say “no,” to reject radically, does not suffice to form a meaningful resistance against any type of inhuman seduction. This is one of the themes of Thomas Mann’s “Mario and the Magician.”

A look at the essay “Bruder Hitler” (“That Man is My Brother”), published in 1938, shows that it is the concise charter of Thomas Mann’s esthetically grounded critique of fascism.

Here, the pattern of “Mario and the Magician” is translated into the political sphere and Hitler, on the lines of Cipolla, is seen and criticized as an artistic character; as an artistic character that – again very close to the tragic travel experience – should be met with interest and, for Hitler as for the magician, applies the assessment “one simply cannot help granting the phenomenon the meed of a certain shuddering admiration.”

Also, the attitude that, for Thomas Mann, seems to be the only one possible towards Hitler strongly reminds us of the “Mario” novella. For Mann, refusal and hatred don’t suffice as opposite positions, because “better, more productive, more honest, more constructive than hatred is recognition, acceptance, the readiness to make oneself one with what is deserving of our hate, even though we run the risk, morally speaking, of forgetting how to say no.”

With the formula of “saying no,” Thomas Mann establishes a direct connection between both texts. A pure opposite position is no match for Cipolla’s arts of seduction. On the contrary: The narrator had brought into play “braving out” as the only feasible contra position, all dangers included. This is exactly, in the formula “to make oneself one with what is deserving of our hate,” the position that Thomas Mann will claim eight years later as the only possible attitude towards Hitler.

Thomas Mann at his desk in Munich in 1930. ETH-Bibliothek Zürich, Thomas-Mann-Archiv