Andreas Platthaus on “Mario and the Magician”

Day four starts with a contribution by our former fellow Andreas Platthaus, journalist and head of literature and literary life at the Frankfurter Allgemeine Zeitung. Platthaus reads the novella as an early statement against emerging fascism in Germany. 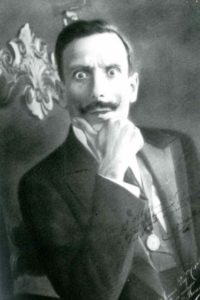 The photo shows Cesare Gabrielli, a real Italian magician whom the Mann family saw on a holiday in 1926. He is considered to be the model for Mann’s Cipolla.  © Fernando Milton Giovannetti

Mario and the Magician marks a turning point in Thomas Mann’s work. It was written in the summer of 1929 and published in spring 1930 and, from the very beginning, the novella was conceived as a political statement. The author himself described it just after publication as an “anecdote” which inadvertently turned into a fable: “out of easy storytelling grew the intellectual tale, out of the private the ethical symbolic tale” (Lebensabriß, published in Die Neue Rundschau No. 6, 1930). The Hungarian literary critic and Marxist philosopher Georg Lukács, who was ten years younger than Mann, had followed Mann’s writing since 1909 and regarded it as the pinnacle of bourgeois literature. He called Mario and the Magician, in retrospect, “Mann’s first political literary work” (The Playful Style, 1955). Lukács explained: “what we are concerned with here is the mass tactics of fascism, the use of suggestion and hypnosis. (…) The defenselessness of those German bourgeois who did not want Hitler, but who obeyed him for over a decade without demur, has never been better described” (In Search of Bourgeois Man, 1945). He wasn’t alone with this opinion, especially not in exile literary circles before 1945, and this interpretation continued to dominate the reception of the novella for several decades. It was only after the collapse of communism in 1989/90 that Mario and the Magicianwas suddenly read as the drama of an individual artist.

The struggle of the individual against collective delusion is indeed a central topic in Mann’s narrative, but to strip it of every contemporary political comment means to misunderstand Mann stressing that his novella had no hidden meaning. Indeed, it’s an obvious one: Cipolla, the magician, named after the Italian word for onion, reveals himself, layer after layer, as a subtle manipulator of his audience. Setting his fable in Italy under the reign of Mussolini, Mann made its allegorical reading almost too easy. It is important to know that, especially at the end of the 1920s, the Nobel Prize-winning author was the aim of political hate speech in Germany, as Friedhelm Marx recently pointed out (Thomas, der tote Mann, published in Frankfurter Allgemeine Zeitung, April 25, 2020). The attacks came from the extreme right, which followed the path of Italian fascism. Writing Mario and the Magician during a secluded summer holiday at the Baltic Sea was a twofold relief for the writer: It interrupted the difficult working process of the first part of the Josephtetralogy and it gave Mann the opportunity to answer to his enemies in literary form. The steaming atmosphere in the large hall at the Italian coast where Cipolla performs is equivalent to the boiling situation back home in 1929, when most Germans regarded National Socialism as some kind of hocus pocus performed by confident men who nonetheless were fun to watch. At least Thomas Mann, once a committed nationalist, but now a desperate democrat, was not willing to let them get away with this. Neither the Germans, nor Hitler and his disciples.

Two years after the publication of Mario and the Magician,Thomas Mann was known to the whole world as an opponent of totalitarianism. The American Hebrew and Jewish Tribune (September 30, 1932) printed his Critique of Antisemitism and, on this occasion, introduced the German author to its readers as follows: “Thomas Mann does not, as some believe, live in the seclusion of the Zauberberg of his dreams. On the contrary, he reveals here an intense, but not strident, absorption in the immediate fate of humanity.” Such a characterization would not have taken place before the immediate perception of Mario and the Magician as a pamphlet against political seductiveness and for rationality. This reception of the text is part of its (success) story.