Donna Rifkind on “Mario and the Magician”

And another insightful contribution for day three of #MutuallyMann: “What had been an experience became a novella — and as much, what had been a novella became an act of becoming.“ – Author Donna Rifkind (“The Sun and Her Stars”) takes Mann’s quote about writing “Mario and the Magician“ as a starting point to reflect on the role of the narrator in the story. “It became a novella in the same way that a conjurer spins magic from the mundane fact of air.“ 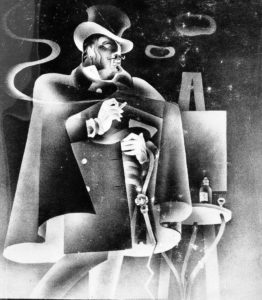 Donna Rifkind, “Mario and the Magician”

The idea for “Mario and the Magician” sprang from an event that occurred while Thomas Mann was on holiday with his family in the Italian resort town of Forte dei Marmi from August 31 to September 13, 1926. During that time, Mann went with his wife Katia and two of his six children—eight-year-old Elisabeth and seven-year-old Michael–to see a magician perform. During his act the magician ritually humiliated members of the audience, including a local waiter with whom the Mann family had become casually acquainted.

When Thomas Mann told his eldest daughter, Erika, about the incident, she commented: “I would not have been surprised if the waiter had gunned down the magician.” “From that moment on,” Mann wrote to a friend in 1930, “what had been an experience became a novella….”

“Became”–yes, but through much more than simply recording; it became a novella in the same way that a conjurer spins magic from the mundane fact of air. We would be mistaken to conflate the narrator of this tale with its creator, even if we know that Mann used his own experience as its genesis. Mann was far more elliptical a storyteller than that. There are elements of Mann in the story’s narrator, but there are just as many in Cipolla, the seductively manipulative magician (in fact, Mann’s family nickname was der Zauberer), and in Mario the shamed spectator as well.

Conspicuously, the narrator remains anonymous in a story whose other characters have richly evocative names. And he often expresses emotion collectively rather than personally: “From the first moment the air of the place made us uneasy, we felt irritable, on edge,” he begins. The uneasiness of the vacation mounts toward the climactic magic show. The monstrousness of Cipolla’s performance embodies the tense atmosphere of the holiday for which, the narrator notes, the family arrived too soon and stayed too late. Toward the end of Cipolla’s act, the narrator switches from weto Ito express guilt for his failure to take the children home much earlier in the evening: “With shame I speak of them,” he says of his children. “For it was not good to be here, least of all for them.”

What had been an experience became a novella, wrote Mann. And as much, what had been a novella became an act of becoming: an expression of Mann’s evolving sense of moral and political obligation. In 1929, when Mann wrote “Mario and the Magician,” he was no fan of the National Socialists, but he was far too deeply attached to his identity as a German and to his fame and assets within Germany to consider emigration. It would be his two eldest children, Erika and Klaus, who finally persuaded Mann that “it was not good to be here, least of all for” him. Even when Mann left the country in 1933, his books were still being sold in Germany and it would be another three years before he made a definitive break, writing that “nothing good can possibly come of the present German regime, not for Germany and not for the world.” In response, the National Socialists stripped Mann of his citizenship and he became, as Jean-Michel Palmier wrote in Weimar in Exile, “one of the great symbols of the anti-fascist emigration.”

But in 1929 this was all in the future. “Mario and the Magician” shows an artistic sensibility struggling its way through the indolence and oppressiveness of an idyll gone rotten, slowly beginning to wonder whether it has stayed too late.

The photo shows an early cover artwork for the first Alfred A. Knopf U.S edition of “Mario and the Magician” in 1931.