The Italian director Luchino Visconti brought “Mario e il mago” as a ballet to the stage of Milan‘s La Scala in 1956. Elisabeth Galvan, Professor of German literature at Università di Napoli L’Orientale, tells us more about this almost unknown story in the second contribution for day four of #MutuallyMann.

Reconstruction of the ballet in a photomontage with music by Franco Mannino. Elisabeth Galvan.

Many certainly know that Italian director Luchino Visconti made Death in Venice into a film. But almost unknown is that, fifteen years prior to the cult movie, Visconti engaged Mario and the Magician in a highly creative way: in 1956 he brought Thomas Mann’s story as a ballet piece to the stage of Milano’s Scala. The score was composed by Visconti’s brother-in-law Franco Mannino, who was also involved as a composer in many of his movies. The ballet production Mario e il mago developed in close collaboration with famous choreographer Léonide Massine and stage designer Lila de Nobili. This transdisciplinary experiment, uncommon for the film director, became a great success and in the role of Silvestra Carla Fracci enjoyed the debut solo performance of her legendary career.

Luchino Visconti adapted the source productively in a production that was rich in intertextual references. Images from Death in Venice already play an important role, other subtexts are the famous short story The Sandman by E.T.A. Hoffmann and the musical adaptations by Léo Delibes (ballet Coppélia ou la Fille aux yeaux d’émail) and Jacques Offenbach (Hoffmanns Erzählungen).

The ballet production is set in a Versilian beach resort around the year 1935. In its center we find the magician Cipolla, precisely conforming to Thomas Mann’s character. The plot focuses strongly on Mario’s unanswered love for Silvestra and hercharacter of illusion. This character becomes articulated in a variation of Hoffman’s motif of the puppet Olimpia: when Mario, in a state of trance, touches an apparition of Silvestra she shatters like a doll. Without success the waiter tries to put the parts back together. He collects all pieces in a suitcase and walks to the harbor where he is halted by the police. The suitcase opens but instead of Silvestra’s body parts small soaps fall on the ground, indicating Silvestra’s charakter of illusion: after all, she is no more than an ideal that ruptures as soon as it is touched—just like soap bubbles that burst at contact. When Silvestra appears again, Mario embraces and kisses her. Cipolla’s whip cracks, Mario wakes and realizes horrified that he had kissed the magician.

While the ensuing shots with which Mario kills the Magician are depicted as a liberating horror in Thomas Mann’s text, the rebellion against suppression remains without liberating effect in Visconti’s adaptation: Mario follows the Carabinieri that take him away, “like an autom,” as it says in Visconti’s libretto, “as if he was still under the diabolical influence that the gun shot could not overrule.” When Thomas Mann wrote the story in 1929, he might have still been hopeful that his warning would be heard in time. From Visconti’s post-war perspective, history had expunged that hope. 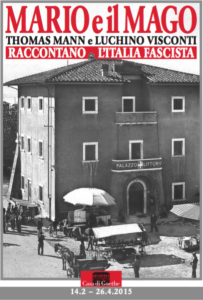 Sadly, there are no film recordings of Visconti’s ballet. Based on the libretto and roughly 90 photographs of the production, located in Visconti’s estate in the Fondazione Gramsci (Rome), I tried to reconstruct the ballet in a photomontage with the music of Franco Mannino. The photomontage was screened during the exhibition “Mario und der Zauberer. Thomas Mann und Luchino Visconti erzählen vom faschistischen Italien“, (“Mario and the Magician. Thomas Mann and Luchino Visconti recount fascist Italy”), curator Elisabeth Galvan, Rome, Casa di Goethe 2/14–4/26/2015.

Thanks to the Archivio Luchino Visconti-Fondazione Gramsci Rom and Casa di Goethe Rom.