How do Susan Sontag, Thomas Mann, the magician Cipolla and 60s avant-garde theater go together? Literary scholar Kai Sina explores these connections in his text “Magic Show and Avant-Garde Theater.“ Departing from the charming anecdote of 16-year-old Sontag visiting Mann on San Remo Drive in 1949, Sina reveals fascinating insights in this second contribution for #MutuallyMann today! 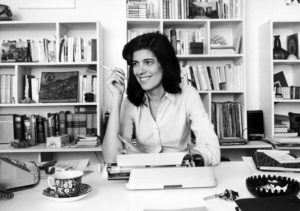 It is undoubtedly a charming anecdote: In December 1949, the sixteen- year-old Susan Sontag visits the old Thomas Mann in his house on San Remo Drive. She wants to talk to him about her favorite book, The Magic Mountain, but is bitterly disappointed by the personal encounter: What a stiff and aloof person! Sontag has written about this unpleasant meeting several times: in her diary, in an early, still unpublished story titled “At Thomas Mann’s,” and finally in her essay “Pilgrimage” from 1987.

No less than the encounter with Thomas Mann himself, his literary work is decisive for Susan Sontag’s intellectual path. Only a few years before her death in 2004, she declared The Magic Mountainthe most important book of her life. Anyone who wants to get an impression of the intensity and persistence of her preoccupation with Mann should take a look at her personal library, which is today kept in the UCLA archives: It contains almost sixty volumes, many of which have been studied intensively.

Against this background it is not surprising that Thomas Mann is also an important reference point in Sontag’s diaries; she often compares unknown, new phenomena with texts or characters by Mann, thus placing them within a familiar framework of interpretation. The entry of August 6, 1966 is a perfect example of this. In her notes, Sontag describes her visit to a rehearsal in London with the theatre directors Peter Brook and Jerzy Grotowski. About Grotowski, one of the most influential and most enigmatic avant-garde theatremakers of the 20th century, she notes associatively:

“Like Caligari or magician in [Thomas Mann’s] Mario + The Magician.”

As obvious as the analogy between Cipolla and Caligari is (Friedhelm Marx has already commented on this in the context of this virtual reading initiative), the association of Grotowski with the magician from Mann’s novella requires further explanation. Reading Sontags diary entry in its entirety, the picture becomes clearer. Before she comes to Mann’s novella, she first discusses Grotowski’s “theory of self-transcendence,” which demands nothing less from the actors than a complete elimination of the mind: “To become silent, to be one’s body.” Grotowski is “dead serious” about this basic idea of his dramatic practice, Sontag emphasizes.

In order to achieve physical and mental ecstasy in the performance, Grotowski works with his actors to the point of total exhaustion. The actors in turn worship him like a guru. But that’s no wonder: He “studied Yoga in India for a time,” Sontag reports, and his “great theme” is the connection between “sex + religion.” She is as fascinated as she is alienated by the intense energy that seems to flow through his theatre group. In contrast, her own attitude towards the transcendent is fundamentally ironic, she comments, citing her novel The Benefactoras an example.

So back to the core question: What connects Cipolla’s magic show with Grotowski’s avant-garde theatre? Sontag’s note sheds light on the connection between performance and transgression; on the ambivalent potential of authority and charisma; on the relationship between eros, submission, and power; finally, she reflects on, at least suggests, the importance of skepticism and irony, which can provide the necessary distance from the cult and the occult. Seen in this light, the short diary entry from August 1966 seems almost like a small preparatory work for Sontag’s provocative and groundbreaking essay from 1975, in which she tried to explain the devastation of an entire epoch: “Fascinating Fascism.”