William Kindermann, acclaimed pianist and Professor at the UCLA Herb Alpert School of Music, reads Mann’s novella against the backdrop of contemporary American politics. In his text, he draws parallels between Mario and a famous U.S. reality TV show… Final sprint for #MutuallyMann! 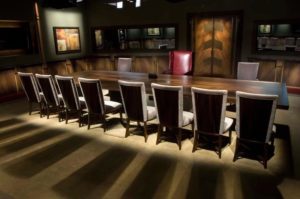 This formula from the reality-television program “The Apprentice” has echoed often during recent years in America. The dynamics of show business and theatrical entertainment have long infused politics, but the past years have brought novelty.

Donald Trump’s interaction with the media ignores critique while promoting the power of myth. His self-promoted image as “a very stable genius” provokes thought. As a person supposedly gifted and creative, a “genius” makes crisp choices and casts strong judgments. With a “higher” cause presumably served–“Make America Great Again!”–faithful followers endorse the demagogue, as does likewise a crowd of cronies in the leader’s party, following a path of self-interest.

Parallels to Thomas Mann’s novella “Mario and the Magician” deserve notice. Thomas Mann’s remarkable “Mr. Onion”–Cavaliere Cipollo—is a colorful entertainer and rich cultural archetype. Cipolla’s conjuring of Mario’s vision of Silvestra toward the end of the tale invites comparison with Mephisto’s conjuring of Faust’s ecstatic initial vision of Gretchen, in Goethe’s play. Other cultural figures spring to mind too, such as the hunchback Rigoletto in Verdi’s opera, the jester with sharp tongue who believes he has triumphed up until the moment of his downfall.

Instead of the storm with ominous thunder in Rigoletto foreshadowing the tragic end, two pistol shots ring out to mark the demise of the disturbing demagogue in Thomas Mann’s tale. A strange parallel to reality emerges if we consider how Stormy Daniels—who allegedly tried to appear on “The Apprentice”—became associated with the demagogue, then tangled against him in a way that attracted attention. Trumpets and strumpets belong to the media world of the president, with the latter silenced through a flow of cash. The hypnotic cult of Cipolla’s dancers on stage is reminiscent of the die-hard devotion of the leader’s political base at his mass rallies. The media mogul occupying the highest political office enjoys firing others, while remaining oblivious to critique and largely immune from negative consequences. In that regard, Mario’s sudden action—“you’re fired”—confronts and negates our experience of this Reality TV administration. The violent response provoked in Mario holds political implications: it is a shocking act triggered by the intolerable abuse of the demagogue.