“Thomas Mann: A Child at Heart” by Morten Høi Jensen

“Was Thomas Mann ever young?“ In the first contribution for our last day of #MutuallyMann, Morten Høi Jensen, author and critic, explores Mann’s relationship with childhood in “Mario and the Magician” and reveals an unusually playful side of the author. 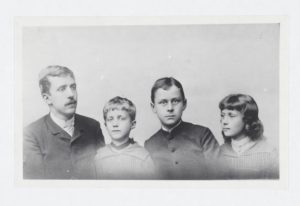 From left to right: Heinrich, Carla, Thomas and Julia Mann around 1889 in Lübeck. ETH-Bibliothek Zurich, Thomas-Mann-Archiv.

Was Thomas Mann ever young? His first novel, the generational saga Buddenbrooks, published when its author was just twenty-six, is the most unlikely novel ever written by a man in his early-to-mid-twenties. In the self-portrait he drew for his brother Heinrich in 1897, he looks indistinguishable from Mann as we know him in old age: neatly groomed and immaculately dressed, the mustache like “a little hat over his mouth” (in Susan Sontag’s words), the bearing as stiffly starched as his shirts. In his essay on the great Prussian novelist Theodor Fontane, written when Mann was in his mid-thirties, he claims there are those temperaments “whose only appropriate age is old; who are, so to speak, classic old men.” Was he only writing about Fontane?

The literary critic Marcel Reich-Ranicki once said that Mann’s famous discipline was “more typical of a bank clerk than an artist.”He brought to the creative act the same orderly, bourgeois principles that had governed his father’s life as a respected merchant and senator in Lübeck, that Gothic little seaport with its medieval church steeples and narrow, cobblestone streets. In this respect his reputation as a serious and distinguished author of long, austerely German novels is self-inflicted. Mann wanted it that way: we know from his diaries what chaos and anarchy reigned inside him—the fear of losing control, the homosexual longing, the prickly ego that blanched at the slightest insult. As he wrote in his notes to the early novella Tonio Kröger, “As a writer, one is enough of an internal adventurer. Externally, he should dress well, damn it, and act respectably!”

All of this conspires to make Mann seem very somber and humorless (very German, in short). But reading a story like Mario and the Magician, despite its tragic ending and ominous political implications, ought to remind us of the child-like pleasure Mann took in his writing, which his self-styled public persona too easily overshadows. For example, it is impossible to read the early description of the narrator and his family’s vacation ordeals and not feel that Mann is having a little fun at his own expense. While describing the “very average humanity” surrounding them on the beach, the narrator confesses to being particularly pained by a woman shouting at her child: “Fuggiéro! Rispondi almeno!Answer when I call you! The spin rispondi was pronounced like shp, as Germans pronounce it; and this, on top of what I felt already, vexed my sensitive soul.” A little earlier, complaining of the monotonous sunshine, the narrator claims it leaves the “deeper, more complex needs of the northern soul […] unsatisfied.” Ecce homo!

In her blog post, Professor Veronika Fuechtner writes that Mann’s Mario and the Magician“pits a corrupt ethics of adulthood against the unacknowledged ethics of children, which entails a strong sense of curiosity, a capacity for boundless empathy, and a clear sense of the sexual nature of human relations.” Extending this claim, I think one could argue that Mann sees in the ethics of children—in their curiosity, empathy, and sexual awareness—an ethics of art. It is these very same qualities that make Thomas Mann such a playful, coquettish author, a quality too little acknowledged in discussions of his writing. (As James Wood has remarked, Mann’s fiction is full of children).

But if we do locate an ethics of art in the children—and, by extension, in the child-like qualities of Mann’s fiction—we must acknowledge its analogue in Cipolla, the magician. (Recall that Mann’s own children referred to him as “The Magician”). Cipolla’s “capacity for self-surrender […] for becoming a tool, for the most unconditional and utter self-abnegation, was but the reverse side of that other power to will and to command”—what is this but the artist-child’s capacity for both tyranny and innocence? (Hans Castorp, in The Magic Mountain, is fond of “playing king”). Toward the end of the story, Cipolla is referred to as a “tyrant”—a word that has its precedent in the description, earlier in the story, of a rather different tyrant capable of wanton destruction and bending others to his will. That tyrant, of course, is a child.