“Thomas Mann and the civilized ‘we'” by Hedwig Richter

The second contribution for the first day comes from Hedwig Richter, Professor of Modern and Contemporary History. What was the self-image of the German bourgeoisie at the time Thomas Mann wrote the novella? Her text gives us a better understanding of Mann’s self-conception and the cultural and political climate in 1929, and serves as another great introduction to our story. 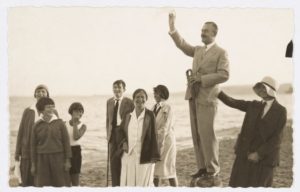 Thomas Mann and the civilized “we”

Since at least the second half of the 19thcentury, many Germans have lived with the feeling that they belong to a “zivilisierten Welt” (a civilized world) or, as it has also been called, to the “Kulturstaaten” (cultural countries). This feeling was a global phenomenon, with the historian Sebastian Conrad speaking of the “global integration of societies” during this period. The bourgeoisie in particular felt that, in the German Empire, they in many ways belonged to an international class, and developed an awareness of their global status. The mercantile bourgeoisie married internationally, undertook long business trips, and went to the theater in Milan and to church in London.

Part of the bourgeois self-image was politics. A civilian was a free person and helped shape things – that was simply a matter of course. The urban politics that Thomas Mann experienced so intensely with his father in Lübeck was embedded in international processes of democratization. As in almost all of Europe, this “self-government” was by no means in opposition to the monarchy. In general, it is wrong to think that Germany was an anti-democratic exception. The Reichstag (parliament) had the usual rights enjoyed by the strong parliaments that existed in the North Atlantic region at that time, and it was elected with what, in comparison to international standards, was a very broad male suffrage.

Interestingly, these global imaginings of “civilization” survived the First World War. And, interestingly again, Thomas Mann now also shared these imaginings, having held an ultraconservative maverick position during the German Empire, one that claimed that a German “Kultur” (culture) contrasts with Western “Zivilisation” (civilization). In “Mario and the Magician,” the community of civilization becomes clear. The bourgeois civility of that “we” is underlined by the fact that the “we” in the novel is a family, the core of the bourgeoisie: this core brings together tradition and future, kindness and strictness, respect and achievement – nature and culture. Everything is immersed in politeness and manners, and children remain in the sphere of “Unschuld” (innocence) and “Zwanglosigkeit” (unpretentiousness). The “we” in “Mario and the Magician” is a family that lives in the idea that civilized behavior is a matter of course, an idea that contrasts painfully with the excrescences of fascism, its “Ungehörigkeit” (impropriety) and “Verwirrung” (confusion), its “Ungerechtigkeit” (injustice) and “Entwürdigung” (degradation).

Also interesting is that the “Unordnung” (chaos or disorder) appears as an “afrikanisches” (African) phenomenon that thrives in the sultriness of the South and is contrary to the “nordisch” (Nordic) spirit. This expresses the highly problematic entanglement of the discourse of civilization with Western colonial ideas. But what is appalling, though, is that even this Nordic and civilized “we” is sucked into the magician’s maelstrom: despite all its reservations, the family attends the magical performance and does not succeed in making the return home that is urgently required and that it even desires.

There are numerous testimonies from citizens who could not believe that the parvenu Adolf Hitler would be able to employ his repugnant arts to gain power over Germany and to bring the population to dance. It seems that Thomas Mann had an inkling.

The photograph shows Thomas Mann and his family on the beach in Nidden, 1930. ETH-Bibliothek Zürich, Thomas-Mann-Archiv / Photographer: Fritz Krauskopf