David B. Morris on Thomas Mann & The Library of Congress

David B. Morris, German Area Specialist at the Library of Congress (LC), takes a closer look at Thomas Mann’s relationship with the library in Washington D.C. Mann was appointed a German literature consultant and fellow in 1941 and visited the LC on a regular basis. 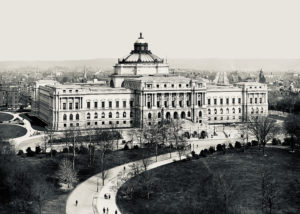 “Thomas Mann and the Library of Congress” by David B. Morris

Thomas Mann’s emigration to the United States in 1938 was one of many watersheds in a turbulent life that extended from the Kaiserreich to the democratic reconstruction and rehabilitation of West Germany after World War II. An important part of this life-change was his association with the Library of Congress. On December 12, 1941, the day after Germany and the United States exchanged declarations of war, Mann accepted an invitation by Librarian Archibald MacLeish to become Consultant in German Literature. A year later Mann’s title was redesignated Fellow in Germanic Literature, a position he retained after his return to Europe in 1952 and until his death three years later. Although Mann’s life in America ended in disillusionment at the rise of McCarthyism, he spoke affectionately of the Library and took pride in his association with it.

The Library’s Manuscript Division holds a collection of Mann’s papers that reflect his creative and political thinking during his American exile. Chief among them is an undated manuscript, written on his official Library of Congress letterhead, of Das Gesetz, a novella published in 1944 which Mann dedicated to the Library. Usually translated as The Tables of The Law, the work is based largely on the story of Moses and the Exodus and reflects Mann’s preoccupation with biblical themes during much of his time in the United States. The great fruit of this preoccupation would be Mann’s tetralogy, Joseph und seine Brüder, which he completed two years into his association with the Library in 1943. The Joseph novels would be Mann’s monumental work of exile, forming a counterpart to his brother Heinrich’s Jugend und Vollendung des Königs Henri IV.

Mann’s duties at the Library were light. His main obligation was to be in Washington two weeks out of the year to give an annual lecture. The Mann collection includes typescripts of three of these lectures: “Joseph and his Brethren” (1942), “The War and the Future” (1943) and “Nietzsche in the Light of Contemporary Events” (1947). The recorded sound collections at the Library contain recordings of these along with two others Mann gave during his tenure: “Germany and the Germans” (1945) and “Goethe and Democracy” (1949). The Manuscript Division’s Sigmund Freud Collection also bears witness to Mann’s time at the Library. Articles by Freud with marginalia in Mann’s hand reflect his long engagement with Freudian psychology in the fashioning of his characters and his efforts to understand the crisis of democracy in Europe.

Mann was no stranger to the United States when he arrived on a Czech passport in 1938. He had given two lecture tours in this country in 1934 and another in 1937. And Americans, for their part, were also acquainted with the Nobel Prize winning author of Buddenbrooks. Mann’s transatlantic renown spared him the penury and alienation that afflicted Heinrich and other exiles in America, many of whom would eventually coalesce around the “Kaiser of German émigrés” in Los Angeles.

Despite these advantages, Mann’s success in America must be credited in large part to his devoted patron Agnes Meyer. Meyer was fluent in German from her upbringing in an immigrant family. Married to the financier and owner of the Washington Post, Eugene Meyer, she enjoyed extensive connections among America’s cultural and political elite. She had long admired Mann’s works before they met during his tour in 1937, after which they began an association that endured until Mann’s death seventeen years later. In addition to reviews, translations, introductions to the Roosevelt White House and other favors for Mann and his family, Meyer used her connections to obtain a faculty position for him at Princeton. Later she drew on her personal friendship with MacLeish and her long association with the Library of Congress, where she had been a member of its Trust Fund Board since 1929, to arrange Mann’s consultancy, personally underwriting his annual salary of $4,800.

Biographers often acknowledge Meyers’ role only grudgingly, internalizing Mann’s own admixture of gratitude for her patronage and resentment of her pointed critiques of his politics and personality. But the support of “that woman,” as Mann often referred to her privately, was crucial for his contemporary and future reputation in America. Meyers’ intercession with MacLeish to secure Mann’s position at the Library is especially important. It freed Mann from his teaching duties at Princeton and allowed him and his family to move to Los Angeles, where he finished the Joseph novels and presided over an exile community whose legacy endures to this day in the form of the Thomas Mann House.

Last year I had the opportunity to re-establish the Library’s connection with its first “Consultant in German Literature.” In cooperation with the Thomas Mann House and the Goethe Institute in Washington, the Library hosted Frido Mann as he followed his grandfather’s footsteps on a tour of North America to deliver lectures on current threats to democracy in America and Europe. In conversations with Frido I was able to show him some items from his grandfather’s association with the Library. It was a deep personal and professional honor to reconnect the Library with this fascinating and important part of its legacy.