One week of our virtual reading initiative comes to an end.

We would like to thank you all for the inspiring and creative contributions. We collected the texts and videos here, so you can get a better overview and look through them again. Also, many many thanks to everyone who posted, commented and discussed with us over the last week.

We hope you all found as much pleasure in reading and analyzing “Mario and the Magician” together as we did! Enjoy… 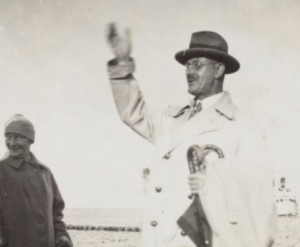 Tobias Boes, Professor of German and literary scholar at University of Notre Dame: What were the circumstances under which Thomas Mann wrote “Mario and the Magician“ and why was 1929 such a crucial year for the author? Watch his video here.

Hedwig Richter, Professor of Modern and Contemporary History: What was the self-image of the German bourgeoisie at the time Thomas Mann wrote the novella? Her text gives us a better understanding of Mann’s self-conception and the cultural and political climate in 1929, and serves as another great introduction to our story. Read “Thomas Mann and the civilized ‘we’” here.

Alex Ross, music critic for The New Yorker: “An allegory of art and the artist” – Alex Ross enriches our discussion by reflecting on the motif of the “Zauberer” (magician) and the power of art to realize grotesque, sometimes even destructive energies. Watch his video here.

Veronika Fuechtner, Professor of German at Dartmouth: In her text she is looking at the central role of children in “Mario and the Magician:“ In which way do kids communicate with other children across language barriers and how does their attention oscillate between overstimulation and boredom in Mann’s story? Read “The Ethics of Adulthood in Times of Crisis” here.

Friedhelm Marx, Thomas Mann Fellow and Professor of German Literature: Friedhelm Marx talks about the uncanny in Mann’s “Mario and the Magician” and its hidden political meaning. Watch his video here.

Donna Rifkind, author of “The Sun and Her Stars: Salka Viertel and Hitler’s Exiles in the Golden Age of Hollywood:“ “What had been an experience became a novella — and as much, what had been a novella became an act of becoming.“ – Rifkind takes Mann’s quote about writing “Mario and the Magician“ as a starting point to reflect on the role of the narrator in the story. “It became a novella in the same way that a conjurer spins magic from the mundane fact of air.“  Read her text here.

Hans Wißkirchen, President of the German Thomas Mann Society:  Wißkirchen thinks about how the depiction of the magician also mirrors Mann’s own political beliefs. Read “A Political Creed” here.

Morten Høi Jensen, author and critic working on a book about The Magic Mountain: “Was Thomas Mann ever young?“ In the first contribution for our last day of #MutuallyMann, Morten Høi Jensen, author and critic, explores Mann’s relationship with childhood in “Mario and the Magician” and reveals an unusually playful side of the author. Read “Thomas Mann: A Child at Heart” here.

Adrian Daub, Professor of Literature at Stanford: As the novella marks the end of a decade, as well as the beginning of new horrors, Daub writes: “After all, it’s unclear the novella really could or should end, because such an ending would to some extent constitute a liberation from the atmosphere it describes.“ Read “A Note on Endings” here.